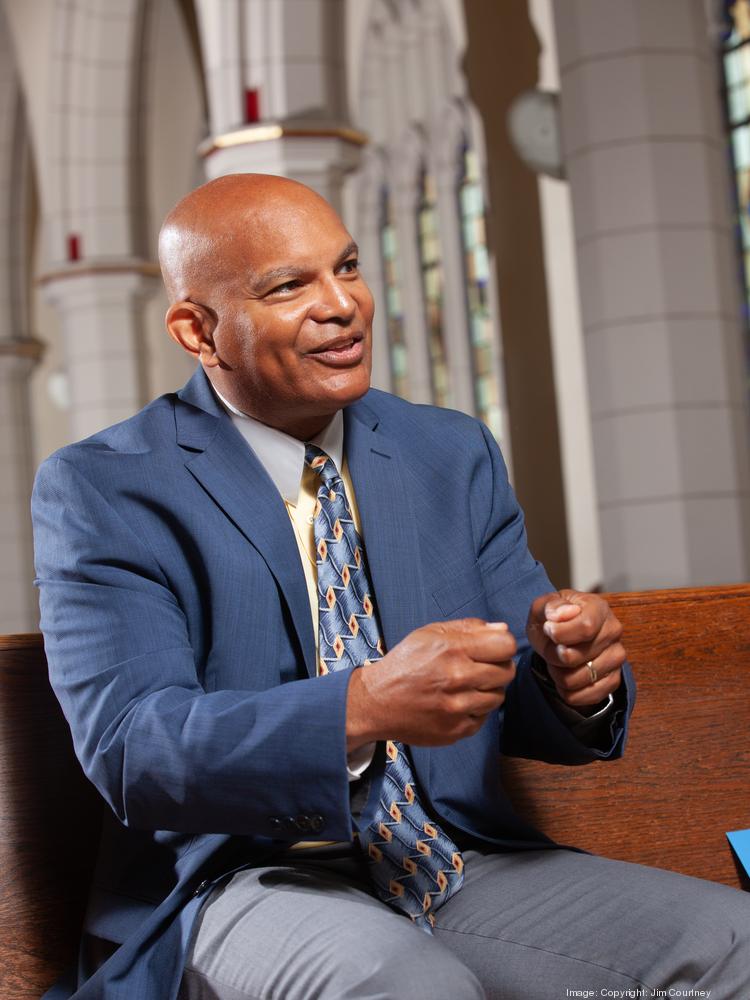 With different backgrounds and varying careers, the Rev. George Nicholas and Dr. Linda Pessar raise awareness and bring together their collective resources to address health disparities in the African-American community. In late April, they were among hundreds who participated in a daylong event designed to bring awareness to the issue and come up with ways to ignite change. The event was sponsored by the University at Buffalo’s Clinical and Translational Research Center along with Millennium Collaborative Care, Erie County Medical Center, the Population Health Collaborative and Greater Buffalo United Churches.

Sit down with Nicholas and it doesn’t take long to recognize his passion. He starts out by pointing to health disparities in his community: higher rates of chronic disease, premature mortality rates and ongoing inequities in education and employment that feed the cycle.

But he’s also hopeful that change can happen. That comes not only from his faith — he holds a master’s in divinity from Colgate University — but from his undergraduate training in sociology, a master’s in public affairs public policy and his experience as a health care administrator before he joined the church.

“I have a passion around urban ministry,” he said.

For years, he has worked with other area pastors and members of the medical community to address health disparities.

They mined the data, showing how African-Americans living in the city are 300 percent more likely to have chronic diseases, higher rates of asthma, cancer, hypertension and diabetes. They also live an average 12 years less than area whites.

“We find there are disparities in every level, so how do we create some energy around looking at the root causes?” he said.

Making that change starts with the social determinants of health, things such as good nutrition from a young age, education, clean air and water.

But just as important is making the African-American community part of the city’s resurgence through higher graduation rates, better preparation for college and careers and access to good-paying jobs.

Changing the system will require also changing the criminal justice system, access to better housing, clean air and water and other efforts to raise African-Americans out of poverty.

If it all sounds overwhelming, you’re getting a feel for what the community experiences.

“We are really swimming upstream,” Nicholas said. “We believe if we can aggresively attack these disparities in other parts of the community outside of actual health care, then we’ll have a greater impact.”

That has led to collaboration by the faith community with the medical school, but also the schools of management, law, nursing and other disciplines, as well as members of the business community.

“There’s a real energy around dealing with this,” he said. “So, yeah, I am optimistic. My optimism is not driven by the condition of the black community; it’s driven by the people who are coming around the table saying they want to get engaged. We have to fix what’s broken, and it’s not going to be addressed by flashy projects.”

With a 40-year career in psychiatry, Pessar has spent a lot of time learning how to read people. She taught in UB’s medical school for decades and was ready to retire when she was invited to start and lead the Center for Medical Humanities.

Rather than the hard sciences, the center focuses on other aspects of the practice of medicine, including the social, cultural, economic, political and historical components and the practice of social medicine.

“You can be the most brilliant scientist, but if you can’t relate that scientific knowledge to practice, then you’re not going to be an effective physician,” she said.

That extends to how physicians relate to the community, including truly understanding the cultu ral and social connections to under-served populations.

“We come to know communities and listen and learn about their perceptions of the medical establishments and their own perceptions of what their needs are,” Pessar said.

She took that concept and used it to develop a course titled “Health in the Neighborhood” for first-year medical students.

In the first offering last spring, seven area families from the community met with 14 students.

The main objective was to build trust, she said, not just plop down a clinic in the middle of a neighborhood.

“We have over 200 years of built-in distrust with the African-American community,” she said. “We cannot offer care that will be accepted until we spend some time building trust.”

Taking a broader view enables physicians to see beyond the patients’ individual situation to other things that affect their health, she said.

Students meet with ministers from the community, they walk the streets of the neighborhood and take the same buses as their patients. But they see other things.

“We noticed that there are more flower memorials to dead adolescents than there are playgrounds,” she said. “We try to put our fingers on the pulse of the neighborhood and spend equal time meeting with families over dinner.”

And even after a lifetime of equal rights volunteer work, Pessar has learned something these past few years about herself: She realized her own attitudes and beliefs about the African-American community were her own projections.

“I had to realize that I understood very little, and if I wanted to be effective I had to go back and learn and listen,” she said.

“I realized all that was an impediment to being able to serve the African-American community and I had to ask them what they believed, what they thought they needed and what their experiences with medicine and white physicians had been.”