HomeNewsPressAn AHCJ panel and a pitch spark story on...
January 17, 2018 Millennium in Press 0

A few months after returning to upstate New York from AHCJ’s conference in Orlando, an email landed in my inbox that grabbed my attention touting an “initiative to again bring healthcare to where people are.”

Reading about the new program among barber shops and beauty salons in the city of Niagara Falls, I was reminded of a panel at Health Journalism 2017. The fusion of the two led to my story, “Haircuts & heart health – Niagara Falls barber shops checking blood pressure.”

If I hadn’t attended the Bending the cost curve: The social determinants of health session at Health Journalism 2017, I’m honestly not sure if I would have seen the full potential in this story. But when I read the email from a local collaborative care organization this past summer, I instantly recalled one of the panel’s speakers, Dr. Jay Bhatt. He had discussed a barber shop in Chicago where he first went to get haircuts and years later helped install a medical clinic.

The words he said had both stuck in my head and made their way to my notepad: “If you want to get your haircut for free, you have to be seen by the doctor.”

This new program in Niagara Falls didn’t turn out to be quite the same. No one at these barber shops and beauty salons, now known as “Health Stops,” has to have their blood pressure taken to get a trim. But the variation on the concept seemed like a step in the right direction towards positive population health.

Various groups were involved in putting the program together, so it was a little while before everyone could be at one of the barber shops at the same time. Then, on a warm day in mid-August, it all came together.

I took a drive to an area of Niagara Falls most tourists looking for rushing water and breathtaking views probably never see. Even having lived in the region for more than 10 years, I hadn’t visited this part of the city either. The shop was small and discreet, so well known by its clientele that there isn’t even a sign outside. They just know where the right door is.

On the inside, I got a nice mix of what I look for as a radio reporter: multiple voices, an intimate space, and natural sound – in this case, the buzz of the barber’s clippers. It even offered an opportunity for some photo and video work to complement the story online. 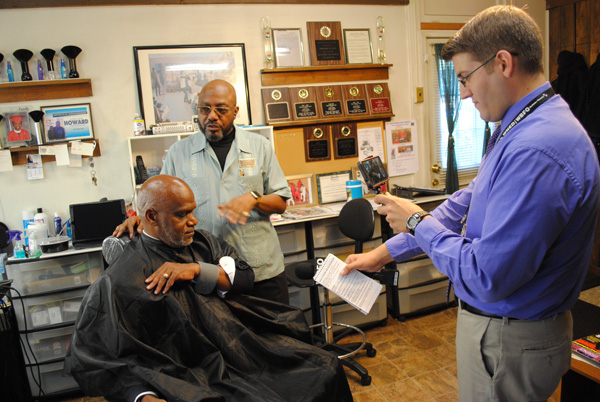 The conversation with the barber revealed that problems with cardiovascular health are nothing new to his clients or his community. But while the significant risk for blood pressure issues among African-Americans is long-standing, the “Health Stops” program has only been active since July.

Looking back on the AHCJ session, I noted Bhatt’s positive outlook. He talked about how over the course of five years that clinic behind his barber shop ended up changing the way the community engaged in their own health. Better decisions were made, residents became more educated and, ultimately, they saw declines in chronic disease and increases in primary care and prevention activity, he told conference attendees.

Perhaps someday another pitch will arrive talking about how rates of cardiovascular disease in Niagara Falls have dropped in communities near the barber shops and salons. Maybe the idea of keeping one’s heart in check will be just as engrained in routine as getting a haircut is. Until then, I’ll keep my eyes peeled for what else comes my way and keep flipping back through my notebook from Health Journalism 2017 for story ideas. “Haircuts and heart health” wasn’t the first to come out of it, and hasn’t been the last. A few more are already in the works.

You can listen to, and read, the barbershop piece here.